Are Llamas A Suitable Choice To Stop Predation on Livestock

Sheep and goat flocks are naturally protected by llamas and dogs. Despite the fact that shepherds have always been the principal guardians of the flocks, other animals are willing and capable of protecting sheep and goats from harm. Sheep flocks with shepherds and guard dogs are shown in ancient tapestries and frescos. Llamas and donkeys are also excellent guardians.

Can A Llama Kill a Coyote?

Now while you’d think llamas wouldn’t pose too much of a threat to say a coyote or a wolf, at 400 pounds with powerful hind legs and highly acute senses, a llama is easily capable of kicking either creature to death with its beefy llama legs. Guard llamas will also naturally herd livestock to safety in inclement weather and have even been observed laying alongside newborn goats and lambs to keep them warm and safe.

In fact, llamas are so effective at safeguarding livestock that some farmers have reported a complete reduction in predation of their livestock after introducing a single llama into their herds. As an added bonus, guard llamas require no training (they do all of this instinctively) and eat the same food as goats and sheep meaning they also require absolutely no specialized care whatsoever. – factfiend.com

Can a Llama Kill a Wolf?

It is possible for a llama to kill a wolf but this isn’t typical. Llamas are taller than wolves, however, they do not pose a huge threat to the predator. Llamas may be able to protect their livestock and possibly even run off a wolf, but more than likely, they will not kill a wolf.

Llamas are able to kill some predatory animals but wolves do not usually fall into that category. It is important to know the limits of a llama when it comes to wolves and how to protect them and your livestock if wolves begin to cause a problem on your property. –farmhouseguide.com

Are Llamas The Solution For Live Stock Predators? 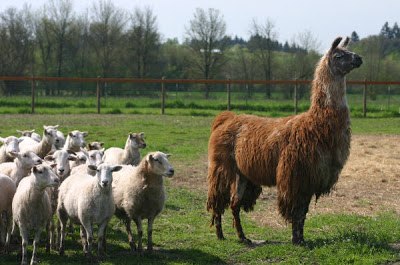 Before setting up any management practices, however, a farmer must learn which predators live in the area. While wolves garner a lot of the attention and claim their share of livestock every year, data from the USDA-National Agricultural Statistics Service (NASS) Montana Field Office show the master predator to be the coyote, followed by dogs, domestic and wild. “A pack of wolves can do a lot of damage, taking out 30 or 40 sheep at a go, but a coyote can steal 365 lambs a year!” says Liebenberg.

“The challenges we face are not at all the same as people with lots of sheep spread out in remote areas. We do have predators here, and it’s an issue, but dealing with wolves is different than dealing with coyotes or black bear,” says Becky Weed, owner of 13 Mile Lamb and Wool in Belgrade, Montana, who was part of the earliest discussions among ranchers in the 90s about using non-lethal techniques. – modernfarmer.com

Yes, they can be effective guard animals when it comes to livestock protection. Although llamas and alpacas appear to be lovely, fluffy, and gentle, many people are unaware of how successfully farmers and ranchers have used these adorable animals to defend their livestock.

Llamas are well-known for their capacity to keep livestock like goats and sheep safe from predators. Before adding a llama or alpaca to their pasture, farmers and ranchers should be aware of a few features of life with guard llamas.